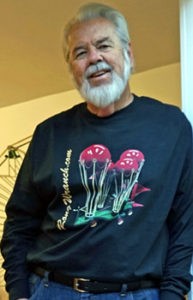 Who is Lon Walters?

Completing a transition from a no nonsense career as a Naval Aviator to ambitious business owner to lighthearted columnist to metal sculptor, Lon successfully unlocked a hibernating sense of humor. And a grand one it is.

While spending thousands of hours flying taxpayer funded, costly aircraft, he formulated the framework for a totally unrelated business upon his retirement. Constructing a bakery, he sold very popular hand-assembled, colorfully creative, pastries in California. After a few years of preposterous early morning working hours, Lon realized selling sugar-laced perishable treats was not an ideal business model for decompressing from the stress of flying. He sold his bakery and began writing and drawing.

His passion for the creative arts evolved when winning the Oreland Elementary School Fourth Grade Art Show with his drawing of a goat. From little things, a hunger grows. He wrote a weekly newspaper column for nine years with a humorous approach to cooking and baking, and completed two popular books. Better yet, he enrolled in adult education courses for welding. Two years and thousands of pounds of metal later, he believed he was ready to engage in three dimensional art,  metal sculpture. Although trained in all welding techniques, he enjoys brazing with a torch. It takes longer to complete a piece, but allows his mind an opportunity to hitch the work to a galloping imagination. Generally, that’s a good thing.

Lon’s traditionally obtained graduate and postgraduate degrees in business have nothing to do with his books’ subject matter, nor his work as a metal sculptor, but looks dandy on the wall behind his desk. Lon and his wife, Margi, along with horses, dogs, cats, birds and 70 year old turtle, live in Sedona, a small town in Arizona very tolerant of idiosyncrasies. His studio is next to their home.

©2022 | Designed and Developed by The Myss Miranda Agency, LLC